The 2016 Sport Wellington Sportsperson of the Year Awards

Congratulations to all of the winners and finalists at the 2016 Sport Wellington Sportsperson of the Year Awards!

In a spectacular Awards Ceremony to a sold-out 700 guests at Wellington’s TSB Arena, World Cup winning All Back and Hurricane Ma’a Nonu was crowned the Brendan Foot Supersite Sportsperson of the Year for 2016. Six judges, experts in their sporting and sports media fields, deliberated over 200 nominations across 12 categories to arrive at the winners.

Sport Wellington Chief Executive Phil Gibbons said the judges faced major challenges due to the large number of high quality nominations submitted this year. “Tonight showed the depth of the Wellington regional sports community – from 700 people attending to the range of finalists at the community, club, emerging to high performance talent. The quality of nominations was outstanding and the judging panel – experts from community sport, media to high performance – were challenged to settle on the final names in all the categories”. 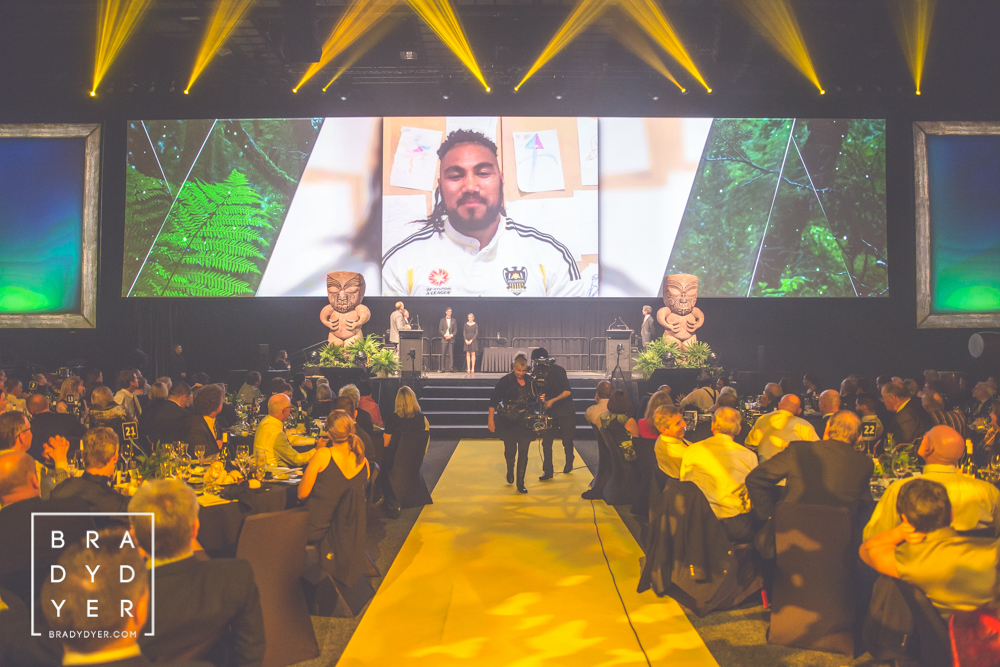 Ma’a Nonu’s long service to Wellington rugby may have ended in 2015 but in his final season with the Hurricanes, the 126 cap veteran was one of the outstanding players who led the team to the franchise’s first appearance in the Super Rugby final since 2006.

Nonu’s fine form continued in the black jersey where he was the first choice second-five eighth for the All Blacks at the 2015 Rugby World Cup in England.

Nonu was commanding in defence while also devastating in attack during the tournament and this was demonstrated by the game-changing try he scored in the final.

The All Blacks would go on to win the tournament which capped off what proved to be Nonu’s most successful year in a Wellington and New Zealand jersey. 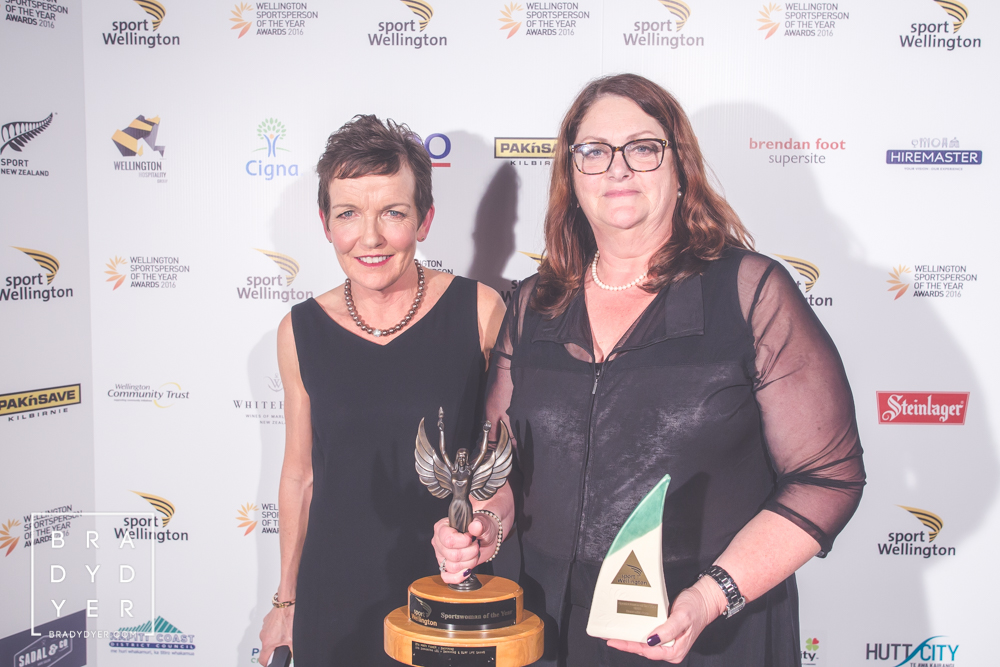 Samantha Lee has once again performed well on the international stage for surf life saving. The 23-year-old broke the world record in the 100m Rescue Medley for the third time at the German Cup in 2015 where she was also named the top performing female. This earned her selection into the New Zealand Surf Life Saving Team that is hoping to retain their world title at the World Championships in 2016.
Lee also excelled in the pool where she won one gold, three silvers and one bronze medal at the New Zealand Open Swim Championships, breaking two open Wellington records and achieving personal best times.

The Dominion Post Personality of the Year
Ben Sigmund – Football 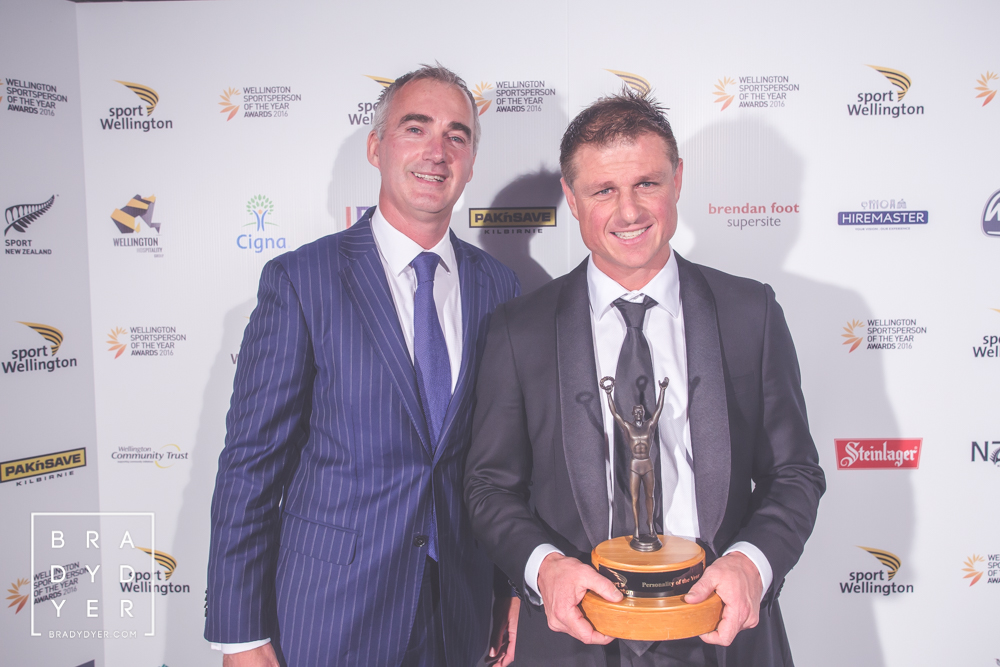 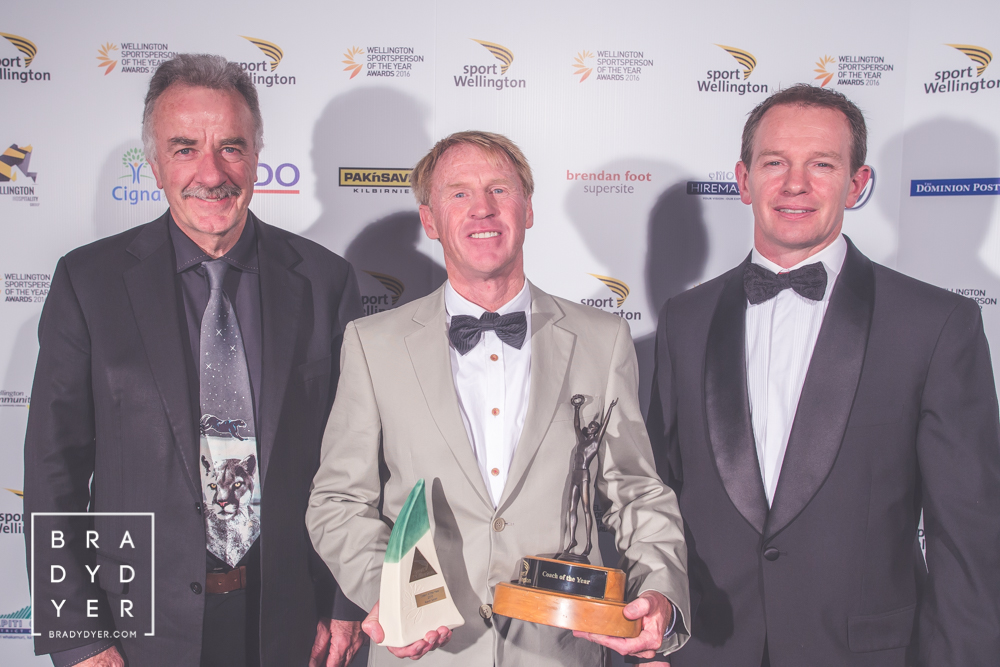 Hugely respected in golf, Kevin Smith coaches a number of Wellington club and representative golfers within the region. Among his many successes, Smith’s most notable achievements have been with the up-and-coming young golfer, Daniel Hillier, who is racking up titles and awards locally, nationally and internationally.

Already recognised as the 2015 Porirua City Coach of the Year and 2016 Kapiti Coach of the Year, Smith’s greatest achievement during the period would be as Coach to the Men’s and Women’s New Zealand Amateur Champions for 2015 – Daniel Hillier and Julianne Alvarez respectively. 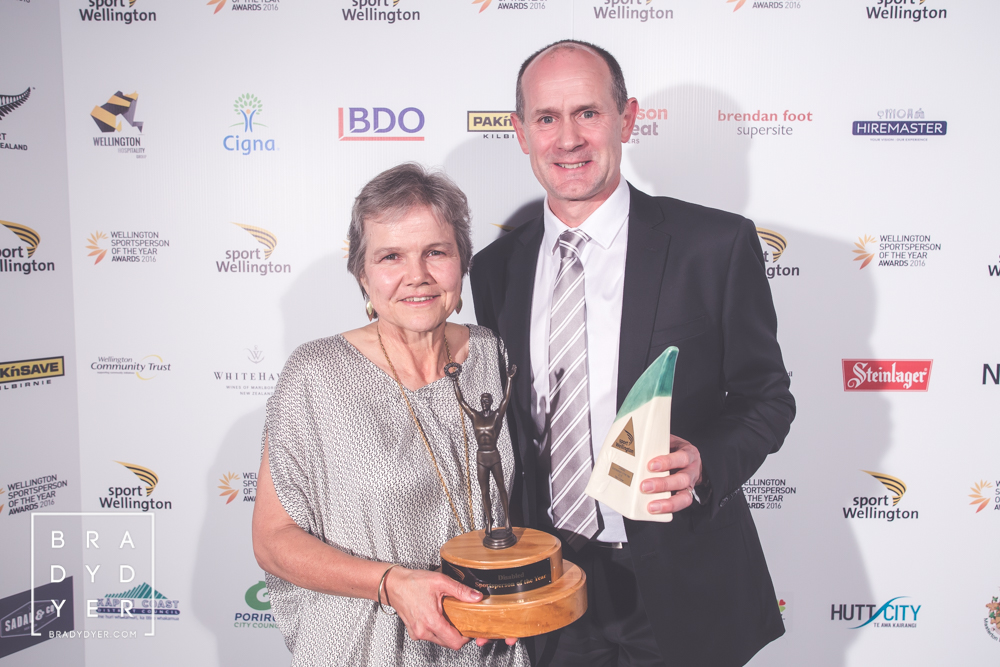 Mary Fisher has once again performed to the highest of standards in her sport and re-set the boundaries by breaking world records.

The vision-impaired athlete broke three world records in 2015 in the S11 100m Backstroke Short Course, 50m Freestyle Short Course and the 50m Butterfly Long Course at the International Paralympic Committee Swimming World Championships, where she was the top New Zealand medalist with three gold medals and two silver medals. Fisher was ranked 10th on the medal tally table out of 580 swimmers from 68 countries. 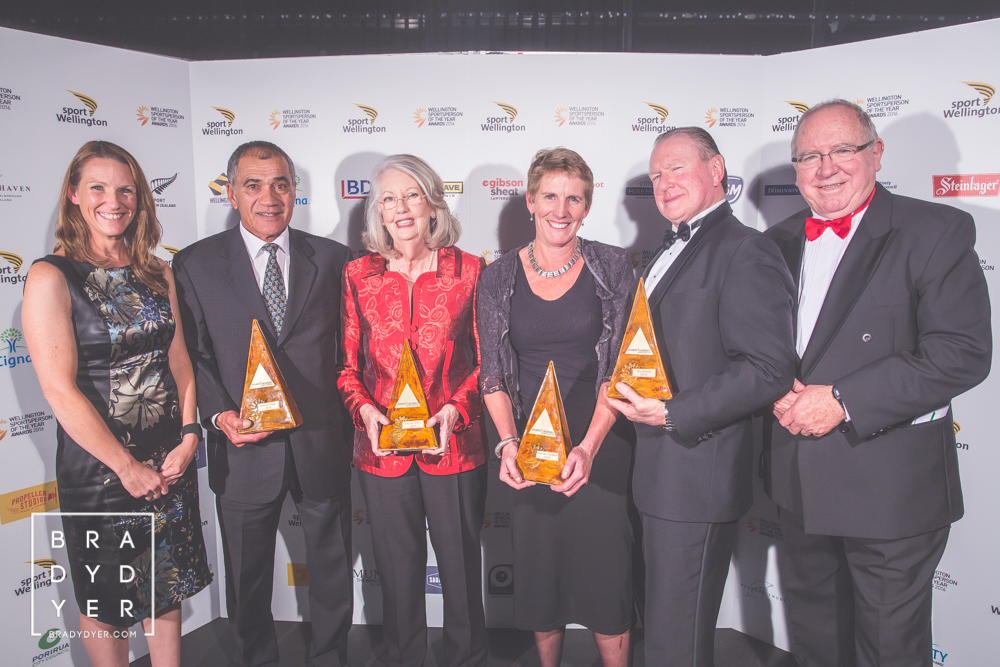 A highlight of the evening was the induction of the Gibson Sheat Lawyers Sports Legends of Wellington. Belinda Cordwell, who pioneered New Zealand women’s tennis on the international stage in the 1980s and 90s, alongside the charismatic Wellington and All Back double act of Stu Wilson and Bernie Fraser from the great Wellington team of the 1980s was inducted. Posthumously, New Zealand table tennis icon Murray Dunn, who was national champion 1960-63 alongside a string of achievements, was also recognised.  The Legends will had plaques unveiled in their honour at the ASB Sports Centre in Kilbirnie the day after the awards.
Murray Dunn – Table Tennis
Belinda Cordwell – Tennis
Stu Wilson – Rugby
Bernie Fraser – Rugby 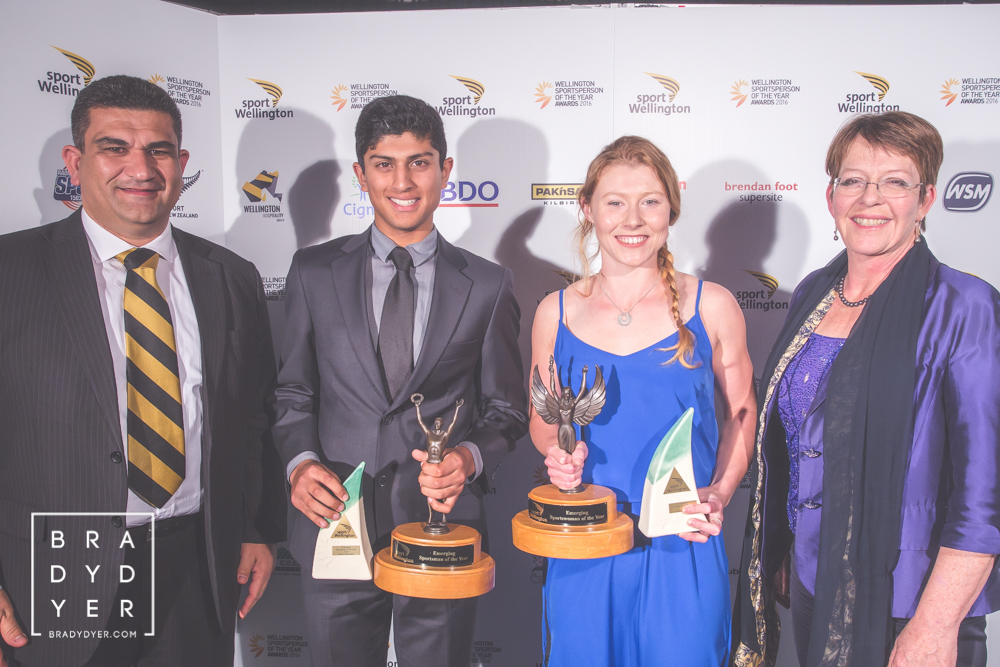 Jackie Kiddle has excelled in her rowing endeavours in the past year. She was selected for the Central Regional Performance Centre (2015-2016) and Rowing New Zealand’s 2016 Elite Summer Squad.
After a successful domestic season in the NZ Summer squad she was selected in the U23 Lightweight Women’s double sculls alongside Zoe McBride. The pair won Gold at the 2015 U23 World Championships, setting a new world record time in the process. Kiddle also placed 4th in the Elite Lightweight Women’s Single Sculls at both the June and July World Rowing Cups in 2015.

Rachin Ravindra went from strength to strength in the 2015/16 cricket season. With a batting average of 41 and a bowling average of 21, the 16-year-old led the Hutt International Boys School team to victory in the National Secondary Schools Competition in December where he was named player of the tournament.
He then went on to represent Wellington in the U19 division and New Zealand in the 2016 International Cricket Council U19 World Cup. Ravindra was the opening batter scoring an impressive 77 in the win against Pakistan. He was also the leading wicket taker on tour taking 16 wickets with his left arm spin. His performance throughout the World Cup was so outstanding that he was awarded captaincy for the last game against South Africa. 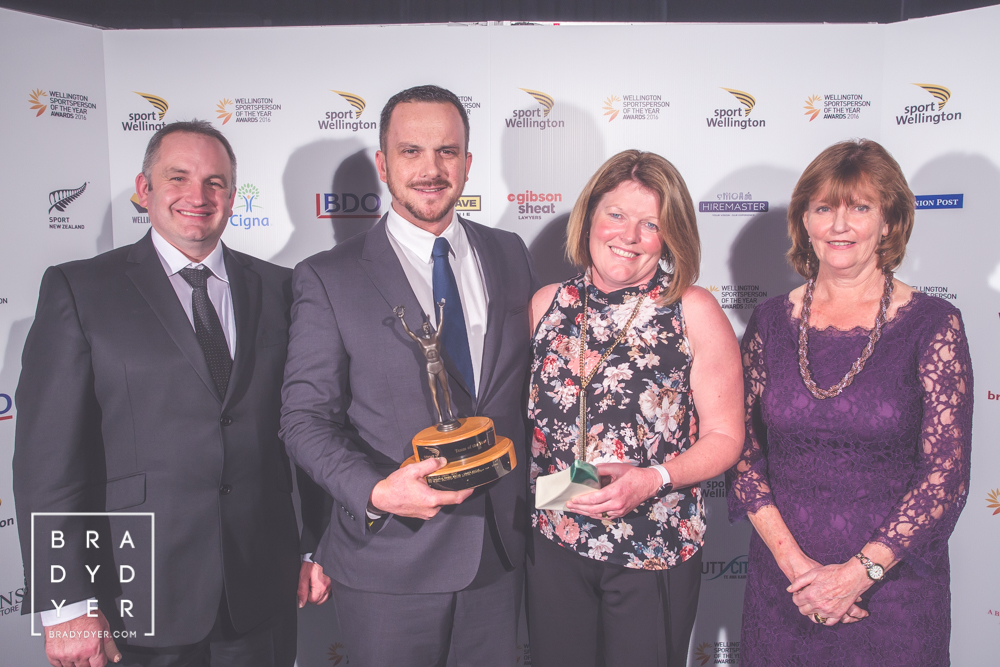 While their performances on-court sealed the deal, it was the quality of their preparation, the strength of their team culture and their commitment to winning that saw them achieve well-deserved success and inspire all who supported them. 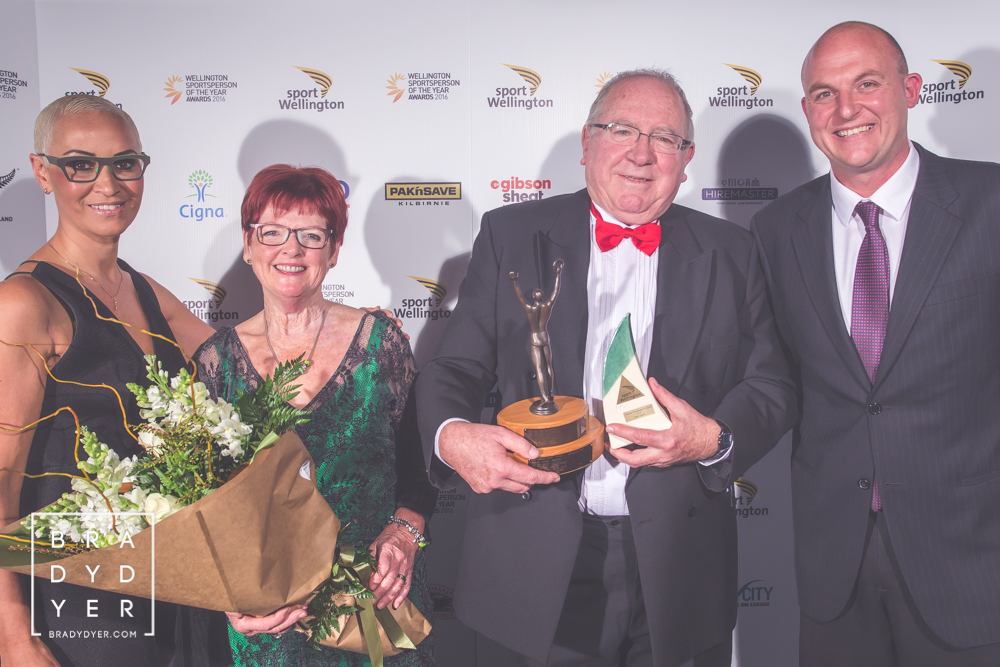 Veteran broadcaster Keith Quinn was honoured as he received the Lifetime Contribution to Sport Award in a career spanning over 40 years calling sports. Quinn, who anchored television sports in the 70s and 80s and travelled extensively on All Blacks tours, Olympic and Commonwealth Games. Quinny received a standing ovation from the audience including many of his peers and his family who were present, and was genuinely humbled and surprised by the accolades delivered by NZME and Wellington broadcaster Jason Pine. 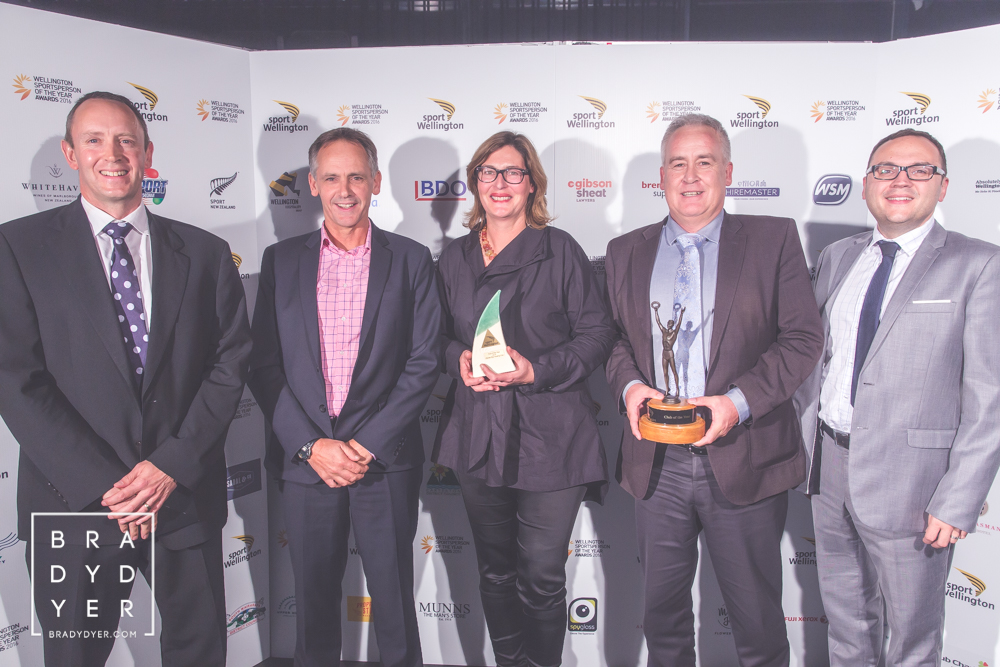 After 90 years of operation and 60 years based in the same building, Worser Bay Boating Club voted at its 2015 AGM to undertake a significant rebuild of their ageing facilities – no mean feat for any club. Immersed in the world of feasibility studies, fundraising, and consents, the club has not taken its eye off the ball and worked hard to ensure that what is great about the club is retained and that business as usual was preserved.
In addition to making significant progress with their clubrooms, Worser Bay Boating Club had a successful club season and a stellar twelve month competition period, with a record-breaking six sailors crowned national champions and eleven members selected for New Zealand teams. 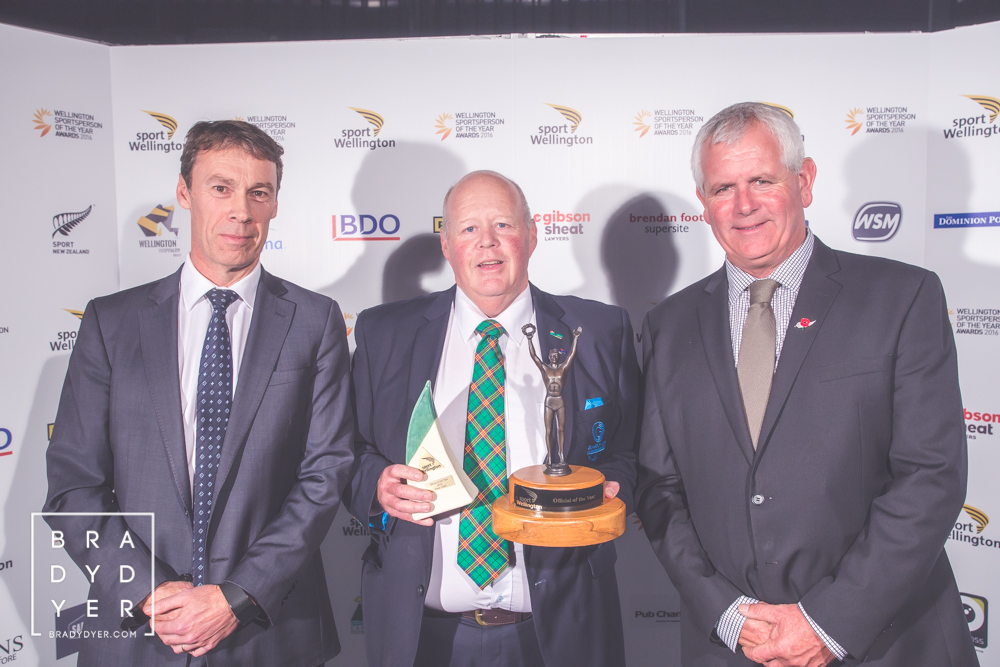 Ross Capill is a highly respected triathlon official both locally and internationally, volunteering his time to officiate a sport that is dependent on competent technical officials. Nationally, Capill was a race referee at both the 2015 Half Ironman in Taupo and at the 2016 International Triathlon Union (ITU) World Cup in New Plymouth. Internationally, he has refereed for the ITU World Triathlon series race in Japan and was a Technical Delegate at the ITU World Duathlon Championships in Australia.

Capill contributes to the running of the Wellington Triathlon Club whilst competing at a high level, representing New Zealand at the Age-Group World Championships in Chicago last September. Capill has recently been selected as a Technical Official for triathlon at the forthcoming 2016 Olympic Games in Rio. 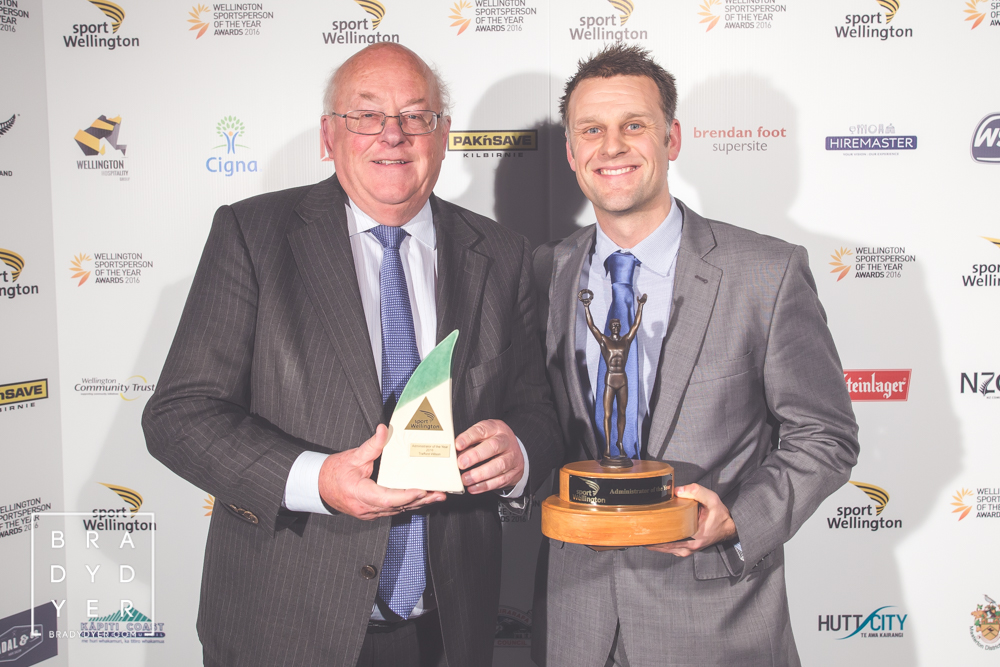 Trafford Wilson has achieved a significant amount in his short time as Chief Executive of Wellington Hockey Association (WHA). He joined the association at a time of significant change and his confident leadership has ensured the needs of the hockey community in Wellington have continued to be met.
Over the year, Wilson has been responsible for increased membership, staff engagement, member satisfaction, sponsorship/grant funding and has secured long term funding commitments. His efforts have resulted in WHA being in a strong position and well placed to achieve its mission of making great hockey happen. 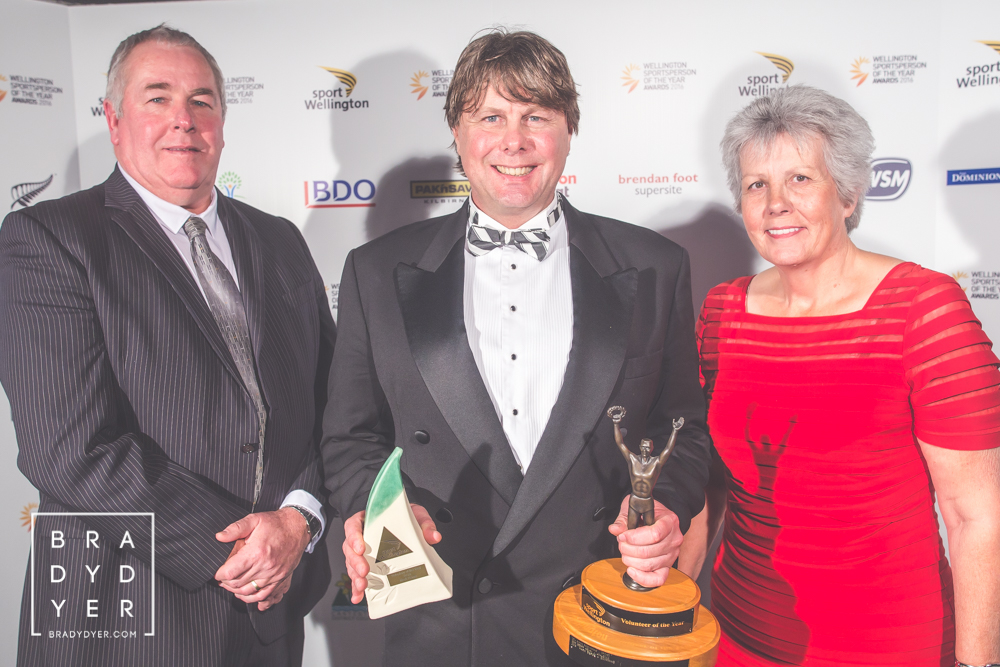 In his role as Chair of Swimming Wellington, Mark Berge has had a significant impact on the organisation and the sport throughout the region. Berge regularly consults with clubs on their governance and succession planning structures to ensure their long term sustainability. His success in this work has seen him recognised by Swimming New Zealand as a leader of best practice in this space.
Berge is a strong advocate for meeting the swimming community’s needs by ensuring enough space and facilities are available, and encouraging the development and training of volunteers.
Berge has had a valuable influence on Swimming Wellington over his 10 years with the organisation with a proactive focus on future development.