Disclosure: I make a few cents off these links below but I have used Minted.com the last 3 years to print my own Xmas cards and love their service. Otherwise I would not share or rave about it.

When it comes to getting really awesome Christmas cards printed to give out this Xmas, there really is only one place to go – Minted.com

They have heaps of awesome card designs, both Xmas & every other event during a year. If you’re going to be buying Christmas cards anyway why not make a little bit more effort & get your own customised cards with your own photo.

Obviously you’ll need a great photo to go with your great cards, so book a family photo shoot from $100 for the session, then order your cards direct from Minted.com

The other great thing about printing your own customised cards is you can customise the wording – this will save you time from having to write the same thing on every one. You can put as much or as little. On our Xmas cards we put “Love from the Dyers xx” at the end – and leave the rest of the card blank so we can write on it. But if you’re doing cards for a business, or doing 100’s of cards you could print a full message on the card as well. The options are endless and you can easily customise everything about your card using their great system. You can customise the colours, shapes, paper upgrades, backers & interiors and free recipient and return addressing printing too.

Here’s two of my favourite designs from Minted.com – they both have their real gold foil. 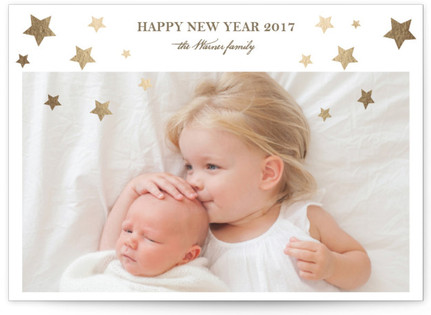 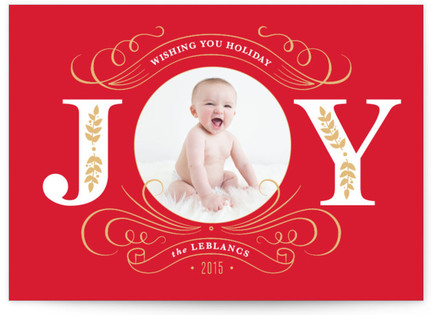 The letterpress cards are also worth checking out! 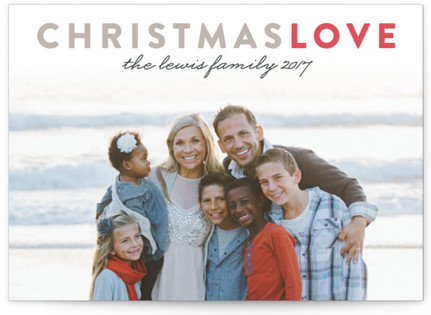 They’ve recently held a competition on their website so make sure you check out the top 10 designs if you don’t have time to trawl through their 100’s of designs. 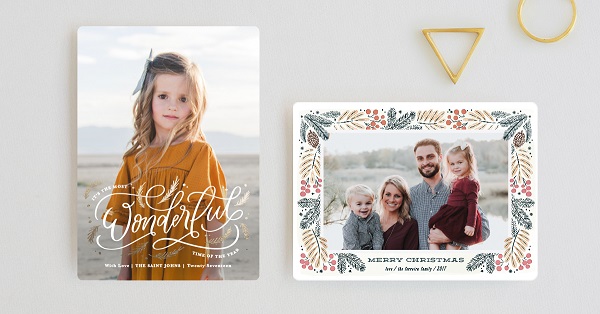 Where does the history of giving cards even come from?

The custom of sending Christmas cards was started in England in 1843 by Sir Henry Cole. He was a civil servant who had helped set-up the new Post Office, and wondered how it could be used more by ordinary people.

Sir Henry had the idea of Christmas Cards with his friend John Horsley, who was an artist. They designed the first card and sold them for 1 shilling each. (That’s about NZ$0.15 today, but in those days it was worth much much more.) The card had three panels. The outer two panels showed people caring for the poor and in the centre panel was a family having a large Christmas dinner! Some people didn’t like the card because it showed a child being given a glass of wine! About 1,000 were printed and sold. They are now very rare and cost thousands to buy now!

The new Post Office was able to offer a Penny stamp because new railways were being built. These could carry much more post than the horse and carriage that had been used before. Also, trains could go a lot faster. Cards became even more popular in the UK when they could be posted in an unsealed envelope for one halfpenny – half the price of an ordinary letter.

As printing methods improved, Christmas cards became much more popular and were produced in large numbers from about 1860. In 1870 the cost of sending a post card, and also Christmas cards, dropped to half a penny. This meant even more people were able to send cards. By the early 1900s, the custom had spread over Europe and had become especially popular in Germany.

The first cards usually had pictures of the Nativity scene on them. In late Victorian times, robins (an English bird) and snow-scenes became popular. In those times the postmen were nicknamed ‘Robin Postmen’ because of the red uniforms they wore.

Christmas Cards appeared in the United States of America in the late 1840’s, but were very expensive and most people couldn’t afford them. It 1875, Louis Prang, a printer who was originally from German but who had also worked on early cards in the UK, started mass producing cards so more people could afford to buy them. Mr Prang’s first cards featured flowers, plants, and children. In 1915, John C. Hall and two of his brothers created Hallmark Cards, who are still one of the biggest card makers today!

BR4DY BR4DY Merry Christmas from me & mine to you & yours! Hope you spend the day doing whatever makes you happy. 🎄 https://t.co/y0k62NPYDn

h J R
BR4DY BR4DY At our first ordinary @HuttCityCouncil meeting a few weeks ago, I was appointed to 12 subcommittees, including the… https://t.co/OTB8LHxKjj